The #DARFchain team has successfully performed 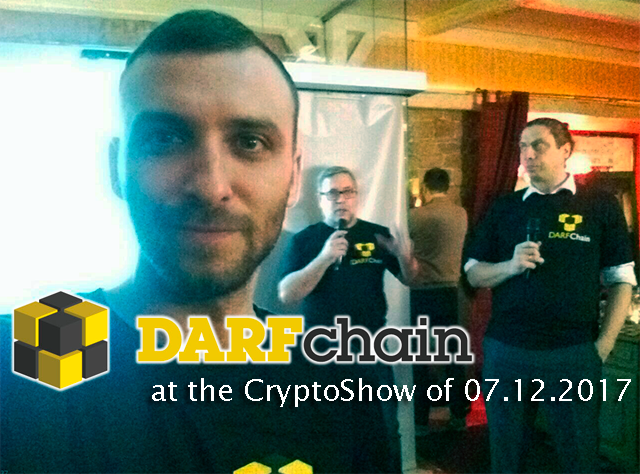 The #DARFchain team has successfully performed at the crypto party on 7th of December CryptoShow (http://cryptoshow.club/) and on 8th of December at the CryptoSpace (http://cryptospace.moscow/) Skolkovo conference. The party was enough fun. Speakers performed dignifiedly. By tradition, they began their speech with a bearded joke. There was a lot of time. Therefore, the details of the product have been discussed well. Journalist Sergey has initiated a very productive discussion, which lasted about an hour.

The meeting showed that there is a real interest to the project. The DARFchain platform has been recognized as very important for the attorney  power development and mutual control by the participants. The platform can really help investors track the ICO-teams work and look for how they spend money. The founders of the platform - Stanislav Taktaev and Konstantin Bakulev - have paid attention to how interest to the project and its mission has been grown during past two or three months.

The full videorecord of the event will be provided by the organizers of CryptoShow soon as they promised.

In addition to Matsumura, everyone agreed that such a platform is effective and necessary. All of them have expressed interest to the project and left contacts for further interaction. Matsumura also said that he would watch (for the project of #DARFchain) and asked to provide him with a white paper document for a more detailed study.

Negotiations were held with the head of the Ethereum Competence Center Vlad Martynov also. There is an their interest in a secure ICO-platform for investors. DARFchain has agreed on the integration with DEEX (Vlad @ rossomaha.xyz Shoemakers). There was negotioations to Avatar also.